Anonymous
i think you can do better next year! use better baadkonaks! see u next year! thanks bye
۱۷ آذر ۸۴ ، ۱۳:۱۸

I am a member of the "Dovienya" team from Azad University of Mashhad. I want to thank all the people responsible for the contest for the smooth completion of the contest.
There are a few point I have to make (but you don't have to read them!)

- Before the contest, I projected ourselves a place among the first ten teams, at best. When after 3 hours we had solved 5 problems, I was beginning to see ourselves amongst the first three. But a few major coding and thinking problems caused us not to be able to solve any more problems in the last 2 hours (1 hour, 59 minutes to be exact) and give our place to better teams. Mea culpa! Mea maxima culpa!

- About the contest problems. I have to disagree with people who said that the problems were too easy and they were too numerous for a contest of this kind.
Easy problems give color and excitement to a contest. Would you've liked it if it was like the 2004 regional, where only an O(20) of teams solved any problems and the rest of them had to go back with their hands empty? So easy problems are good. And if you're so algorithmically inclined, why didn't you solve any of the last 3 problems? (I'm not targeting any specific you, since no one solved even the "Hotel" problem (H) which looks trivial at this point after the contest.)
On the same note, when there are many problems in the problem set, teams with better teamwork and resource coordination flourish and ascend, and teams with inferior or nonexistent teamwork tank inevitably. (That's us right there!)
I congratulate the problem setters for their almost balanced set of problems. I say almost because I do believe that the set was a tad too easy. But who can blame them with the scary experience of last year! (For the record, we solved 4 problems last year, but that's another story altogether.)

- I have one word for Amirkabir teams. Condolences! And here's another thought for you : "Thou shalt not try to undermine thy neighbor!"

- I wanted to congratulate the Beheshti University teams, specially the "Untitled.cpp [+]" team. Their "Delta" team was doing very good in UVA contests, and my friends thought them to be the real chance for second place (Not after us, after Sharif teams!)

- I wanted to congratulate the "Ilúvatar" team. Finally, they've got the chance to, if not outperform the Stupendous in the contest, at least outlast them! Besides, they have one of the cooler names in the regionals. Power to Tolkien!

- I wanted to congratulate our own university's "Deadlock". They did very well for a 66.6% first-timers. Wait a minute, our own team were 66.7% first-timers too!

- One team that definitely deserved a better place (that I know of) was Ferdowsi University's "Three Sacred Devils". They definitely were better than us in our mutual practice sessions.

- It seems to me that support for the ICPC inside the administration of Sharif university is fading. I don't know why, but I sense that if it wasn't for personal perseverance of Dr. Ghodsi and a few others (Mr. Bavar, Mr. Khosravi) and the enthusiasm of students, there would have been no such fun and memorable thing as ICPC in Iran. So, thanks to all who strive so we can thrive! (or was it the other way around?!)

OK, that was long. Only one thing remains to say.
If anybody is thinking about organizing a contest in the near future, how about including the from-this-point-on ineligibles too? We have hearts too, you know.

P.S. I couldn't not say this. In case you were wondering, "Dovienya" means "luck" in the Old Tongue. For more information, read about 12000 pages from Robert Jordan's Wheel of Time epic novels.
۱۶ آذر ۸۴ ، ۰۹:۳۴

Shiraz University
Thanks and congratulation.

Every thing was good except of first lunch that was as usual and was not as important as the problems that were so easy.

Problem E was not as Hard as submits show , and this was a big problem. Thanks again .
۱۶ آذر ۸۴ ، ۰۹:۳۲

Congratulations for yet another successful completion of Regional contest and that your Sharif Team has qualified for the World Finals yet another time. I sincerely hope that this year both the Iranian tems will put up an excellent performance in the World Finals.
With best regards,

Morteza Shahriari Nia (Seeb)
I'd like to thank you for the chance you gave us, but I'm sorry that although we could definitely solve at least 4 of the problems, unfortunately our team work was very bad that we couldn't succeed. that was a really big mistake of us. Any way, thank you again Mr Ghodsi for the chance, It was really a good teams contest.
۱۵ آذر ۸۴ ، ۱۶:۴۶

We are “BK Eagle”, the ACM team from Ho Chi Minh City University of Technology. We have just arrived in Vietnam recently.

We want to give you our special thanks for all of your support when we were in Iran. Before going to your country, we were worried about everything because we had never been to Iran before. But you and your staff are friendly and very kind to us. So we had a very happy time in Iran.

We have also learned many things through the contest. After come back to Vietnam, we will continue to study hard so that we can contribute to the developing of our country in the future.

Once again, thank you very much for helping us. We wish you a good health and many successes in the future.

Hadi
1. The contest was held very well, and without any problems for our team.
2. This was my first participation at the regionals, and I enjoyed it. Although our result was much worse than expected. 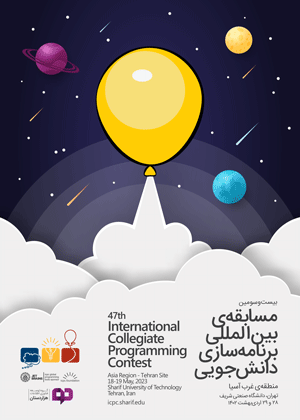